Just up the mountain from the village center, the Satomiya Shrine is the first sacred stop along the Ontake Pilgrimage Trail. It has historically been a place to pray for safe passage and an enlightening journey and make one’s presence on the mountain known. Satomiya was first built in the late 1400s, replacing a much older shrine that had been honored by the villagers for centuries before. It’s closely linked to the shrine on Ontake’s summit.

After the first 67 steps from the main shrine gate near the road, you pass through a moss covered second gate and enter a complex of smaller shrines. Stop a moment to purify yourself with the pure spring water at the temizuya. The hand washing procedure and other shrine etiquette is outlined here:

When finished, ring the bell with a wooden mallet to announce your ascent.

Temizuya – For purification before the ascent

Sound the bell before your ascent

From there 381 steps rise through a dense groves of hinoki and sawara cypress to the main shrine nestled against the cliffs at the top.

Fudo and the Dragon

Dragon shrine along the way

Flags at the shrine for Daikokuten … in India known as Shiva

After the climb you reach the complex with the main shrine dedicated to the deities of Mt. Ontake. To pay your respects like a local:

Be sure to bring an empty water bottle to fill up at the pure spring that bubbles from the cliffs beside the shrine. 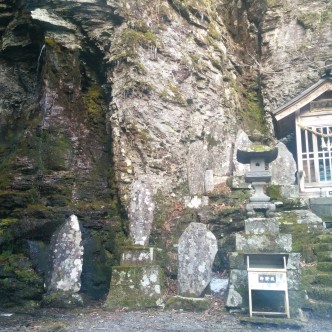 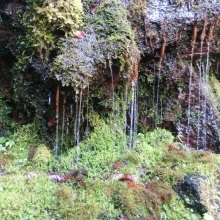 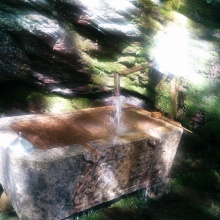 Back below, wooden Mt. Ontake talismans available from the shrine shop make great gifts and souvenirs. If you’ll be doing other hiking you can also get a wooden walking stick used by pilgrims with the shrine’s name burned into it. This is a common practice at mountain huts and shrines around Japan.

Also, keep an eye open for the large troupe of monkeys that lives on the mountain above the cliffs, although if they’re around you won’t be able to miss them!